When Khouan M. Rodriguez came to North Carolina in 1995, she did not know many people and had limited professional connections. She realized that she needed to volunteer with an organization in order to connect more with the community and learn about available opportunities. She visited the Greensboro Buddhist Center and spoke with Pramaha Somsack Sambimb, the head monk, about volunteer opportunities. Pramaha Sambimb told her to meet with Dr. Raleigh Bailey- the first director and founder of both the AmeriCorps Cross-Cultural Education Service Systems (ACCESS) Project and the Center for New North Carolinians. Khouan applied for an AmeriCorps position with the ACCESS Project and was accepted to serve from September 1997 through August 1998 at the Greensboro Buddhist Center under the supervision of Pramaha Sambimb. Khouan signed up for a consecutive term but had to resign due to a challenging pregnancy. 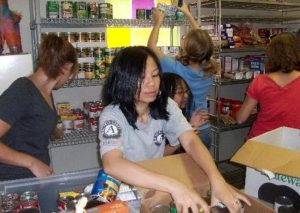 During the summer of 2000, Dr. Bailey hired Khouan part-time to provide administrative support to the AmeriCorps staff. This was the same year the Immigrant Health ACCESS Project (IHAP) received its first funding. Khouan applied for the Lay Health Advisor position with IHAP and was hired in July 2000 to work with the Laotian community. In 2004, three years after the CNNC was incepted, Khouan was hired to be the coordinator of the ACCESS Project and later promoted to program director. Khouan has since remained in this position, making her the longest serving AmeriCorps program director in North Carolina. Furthermore, under Khouan’s leadership, the ACCESS Project received several recommendations from the North Carolina Commission on Volunteerism and Community Service to compete nationally against other AmeriCorps programs across the country for funding. Khouan has successfully secured competitive-level funding for more than a decade.

Khouan has learned valuable lessons in her decades of experience and involvement in AmeriCorps. She advised that not everyday or even every month or year will be easy. There will always be challenges, struggles, and difficult times, but having a support network and knowing that these times are temporary and will pass has helped Khouan in continuing to support and serve others through the ACCESS Project.

When asked what she wished the general public knew about AmeriCorps, Khouan responded that she wanted more people to know that it is a wonderful way to give back to the community and that AmeriCorps demonstrates a commitment to serve. While Khouan acknowledged that there is a small monetary benefit in serving in AmeriCorps, she believed that the professional development opportunities and transferable skills many individuals develop while serving are the more valuable aspects the program provides. In some cases, serving in AmeriCorps has helped members decide on a career path. Khouan has seen former members become lawyers, teachers, social workers, and even doctors.

For Khouan, AmeriCorps allows for people to become the best version of themselves. Khouan noted how she sees the transformation in all who serve for AmeriCorps which has become a strong motivator in her commitment to serve as the CNNC’s AmeriCorps ACCESS Project Director.