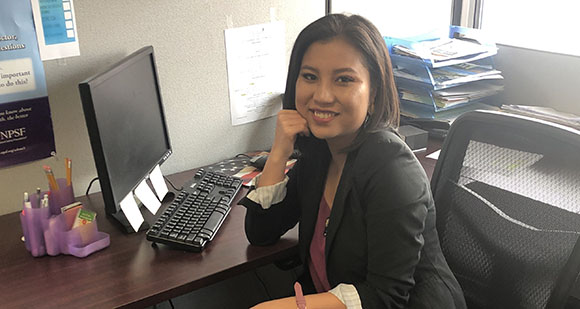 Vung was born in a small Montagnard village in the Central Highlands of Vietnam. When she came to the United States as a young girl, she knew only one word of English, “Hello.” She struggled with this new country just like many other newcomers.

Vung believes education is the key to opportunities. She is the first person in her family to graduate from college. She graduated from Guilford College and majored in Community and Justice Studies. While at Guilford, Vung served as a a Bonner Scholar, providing community service to a diverse group of people. She has a great passion for working with people, especially with the immigrant and refugee communities. At her previous jobs, she volunteered and then worked for Doris Henderson Newcomers School, and was a team member at Church World Service, a resettlement agency in Greensboro. She values all of the work that has been done toward making our community a welcoming, accessible place for everyone.

The Center for New North Carolinians (CNNC) holds a dear place in Vung’s heart. When she first came to the United States, Vung was one of the students who participated in the after school programs at the Glen Haven Community Center, one of the community centers that was established by the CNNC. The Center has played an important role in her life, and the people there inspired her to be where she is today.

Staying connected to her roots is very important to Vung. She is very close to her family and her community in Greensboro, and has also traveled to Vietnam to keep in close touch with her relatives and the village community that has meant so much to her.